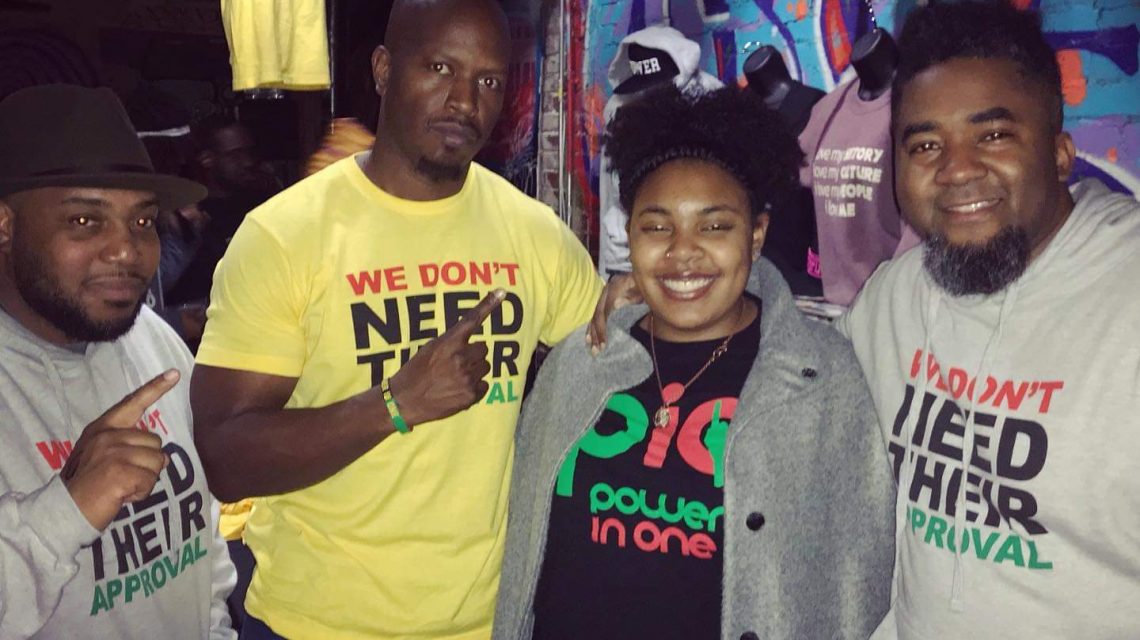 The end of the year is a great time to reflect on the journey of highs and lows one has faced in order to prepare for the year to come. A new year often symbolizes a reset, to start anew and with that in mind it is important to consider that you don’t necessarily need a date change in order to have a reset, you can choose to evolve when you feel it is best. As PIO looks to what 2019 might have in store, we reflect upon all the brand has done in its growth throughout the year of 2018. 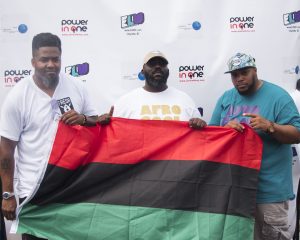 First and foremost, this year was PIO’s 7th anniversary for being a brand in business. Since the brand started in 2011, the brand has grown from customer base to the local presence in Charlotte, the DC area, and LA. Each of the founding managing partners reside in one of the three cities mentioned which poses as an opportunity to spread the empowerment PIO has to offer not just online but in those local markets.

In 2018, PIO got the addition of a consulting team member (myself) Naomi Crumpley. I came on as a fashion design and blogging consultant, adding my design background/perspective to what the brand already has to offer. Being a part of the PIO team has allowed me to see first hand how the managing partners work hard to make the empowering impact they seek to see a reality. 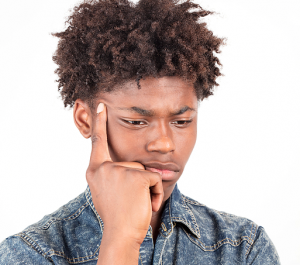 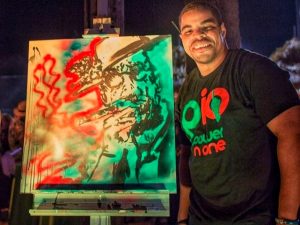 This year the brand also gained a new brand ambassador, the impressive young actor/entrepreneur AJ Carr. I wrote a piece about him earlier on in the year and it is so exciting to see him grow in his craft and creativity alongside the brand. We also maintained our brand ambassador relationship with the incredible artist Kolpeace. His live interactive art pieces paint my worries away. Both of these ambassadors continue to set forth positivity and create the kind of empowering impact PIO exists for in the first place. We look forward to seeing what 2019 holds in store for these rising creatives.

For PIO collections, 2018 was filled with a plethora of inspiration for the brand. For spring/summer, we released the inspire collection which was developed through the concept of putting words into action. The minimalist design gives it an open-ended interpretation, allowing people to choose how to inspire or to be represented as a source of inspiration. 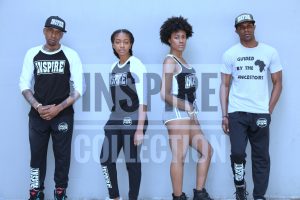 Over the summer we release the “Casual Experience” which was a collective of staple PIO designs in a few new colorways serving as an opportunity to represent the same messages from different color options. We released the teal and purple afro-cool tees, the ladies-fit teal afro puff tank, the red and black guided by the ancestor’s tee, and the yellow and navy power in one logo tee. 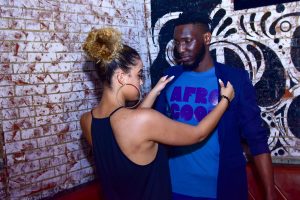 In a dope photoshoot we were able to capture the ways in which those items could be worn for casual experiences like a date night, or a night out, other ways to wear the designs that were not just on a streetwear appeal. 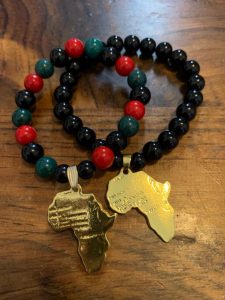 For fall/winter, we pushed more staple designs in newer colorways with the Revolution Collection. These designs offer winter weather silhouettes while representing key PIO messages. We released the “We Don’t Need Their Approval” heather grey hoodie which is a softer alternative to the previous design in yellow. We also released the heather maroon “I Love” sweatshirt which can last (color-wise) all of winter including valentine’s day season. 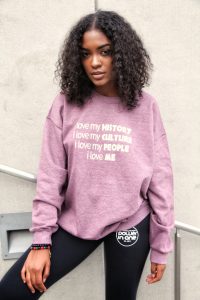 We also released the heather navy and gold “Guided by the Ancestors” long sleeve tee which carries a different design for the same concept as the red and black guided tees released in the summer. For accessories, we released another handcrafted bracelet (all of which are handcrafted by PIO’s musical genius Ryan Lucas) which included black onyx beads or wooden beads with a golden Africa pendant.

Each collection is about empowering people to create effective change for their communities and themselves through the platform of fashion. Being able to self express in such a positive way can have lasting effects which makes the brand something important to buy into.

Alongside all the new merchandise the brand produced, there were also the PIO signature events. There was the annual ELW (empowering lifestyles weekend) event in Charlotte, NC this summer. I also wrote a piece about this uplifting weekend. It represents the direct impact the brand makes in the community of its fou 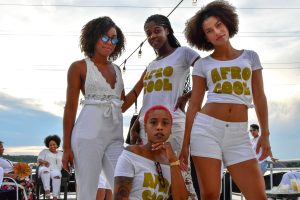 nding town of Charlotte, NC. This weekend usually consists of a 5K race, a yacht party, and this year the first ever PIO sponsored Afro Cool Fest.  Within all these events there was a fashion show (on the yacht), Kolpeace performed his unique live painting style twice, and we got a chance to hear the musical workings of Ryan Lucas, Letasia, the local Charlotte artists Indigo Jo and Leesha Baby & Dee Dray. We also released a special edition Afro Cool white and gold tee. The Casual experience came out around the same time. The purple and teal color influences were inspired by the popular colors of Charlotte.

In December of this year Ryan brought together a collective of DC artists to create the “We Don’t Need Their Approval” Music Fest. It was an intimate performance space that gave local artists a stage to express on similar to the Afro Cool fest in Charlotte. 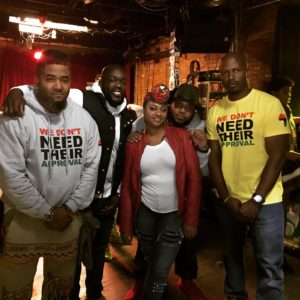 The difference is that is was in the DC market.  Other than the signature PIO events, you can be sure to find us vending all over the country at music festivals, black culture events, and more.

Here are just a few of the events we were at this year: 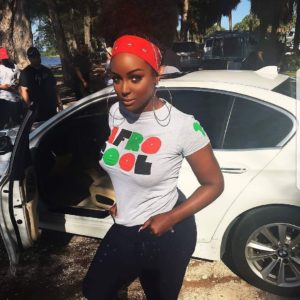 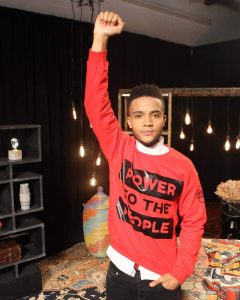 Nick Ashe host the PBS series, Afro Pop while rocking the ‘Power to the People’ Sweatshirt

At the end of such a busy and successful year it is important not to forget our brief tv sightings.  Singer, Amara La Negra wore our red black and green Afro Cool tee in a scene on Love and Hip Hop Miami which airs on VH1. Queen Sugar actor, Nick Ashe wore our red and liquid black Power to the People Sweatshirt during the Afro Pop Series on PBS.

Shout out to all those that have and continue to support Power In One. Keep a look out for our new products, designs, and events to come in 2019. Stay empowered and uplifted going into the new year. Don’t forget to follow us on all platforms @PowerInOne to see what we are up to.

Much Peace and Power! 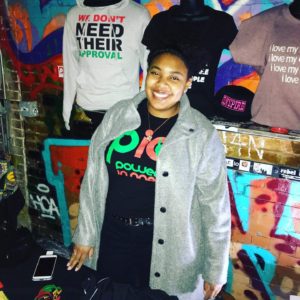